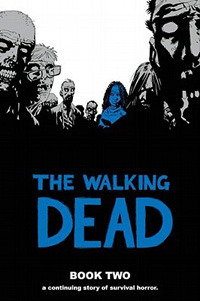 Man, you gotta love comics, especially ones that feature the Walking Dead. If you're a fan of the show, you'll love the comics. If you're a fan of the comics, chances are you'll love the show. It's amazing that AMC was able to turn such a stunning set of comics into an amazing tv series that follows along the original story line (pretty well) and even amplifies the human suffering and the emotional toll it takes on the survivors. It's gritty, gory, and addicting. What are you waiting for?!

A must read for fans of Zombies, comics, or the tv show.
Posted by Erin Cataldi at 7:54 AM