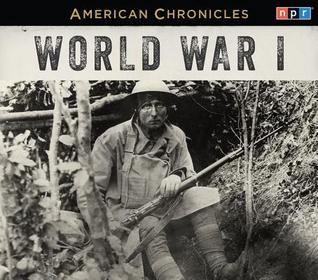 NPR compiled this wonderful assortment of World War I stories to mark the 100th anniversary of "The War to End All Wars." Included in this three disc set are: first hand accounts from veterans, author talks with noted war historians, poetry, broadcasts from that era, and many often overlooked stories and battles. From the last of the dough-boys to the Christmas Truce of 1914, this compilation is a must for fans of military history. Not only does it shed light in the first World War, but is sets the stage for the factors and scenarios that triggered the second World War as well. Fans of American and cultural history will also enjoy the commentary and stories on a wide variety of topics from the "Bonus Army" to Armistice Day and the Great Depression. Hosted by Rachel Martin, this NPR Collection is a must for military buffs and novices; there is something for everyone.  - Erin Cataldi, Johnson County Public Library, Franklin, Indiana
Posted by Erin Cataldi at 8:14 AM

Email ThisBlogThis!Share to TwitterShare to FacebookShare to Pinterest
Labels: American Chronicles: World War I, audiobok, npr, rachel martin, the doughboys, the war to end all wars