An Offer From a Gentleman 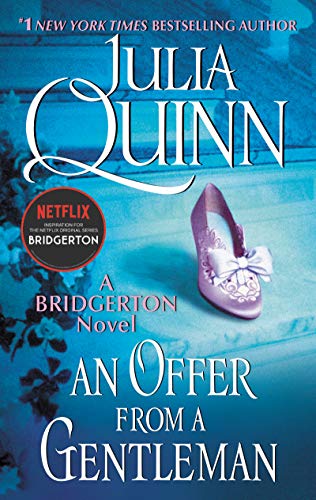 I LOVED the fairy tale aspect of this one and I really hope there are similar "themes" in some of the upcoming installments. The third book focuses on Sophie Beckett, the bastard of an earl who was horribly mistreated after his untimely death. Being forced to act as a maidservant to her stepmother and stepsisters is unbearable and one night the other servants convince her to dress up and sneak to masquerade ball where she meets the man of her dreams, Benedict Bridgerton. She doesn't even know who he is but they are both captivated by each other. She flees at midnight and doesn't encounter him until years later. Her circumstances haven't improved much and he doesn't recognize her. But is there a spark of interest. Could a member of the ton have feelings for a lowly servant girl? Fun, witty, and sexy. Give me more please!
Posted by Erin Cataldi at 11:04 AM

Email ThisBlogThis!Share to TwitterShare to FacebookShare to Pinterest
Labels: an offer from a gentleman, bridgerton, julia quinn