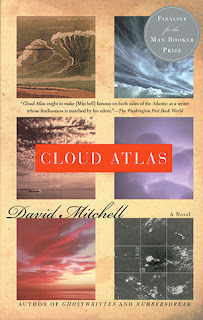 I am sooo glad I stuck with this book!!! It starts off super slow but after about 0 pages I really started to get into it. Halfway through I couldn't put the damn thing down. David Mitchell masterfully weaves six tales together even though they take place at different points in time and helps us realize that we are all one drop in the ocean, but each drop can indeed have an impact on future generations whether we realize it or not. We may never live to see what our actions inspire, but everyone, no matter how small, makes a difference in the future. This work is simply stunning, the language, the stprylines, the sheer creativity of combining a 19th century shipmate, a pre-World War II aspiring composer, a perfectly sane gentleman locked in an old folks home, a young journalist covering the scandal of the decade, a fabricant of the future, and a villager from the distant future after the fall of mankind is just stunning. Their tales weave together a story for the ages. I absolutely can't wait to see the movie!
Posted by Erin Cataldi at 8:55 AM No comments: LOVED this book!! It was easily the best historical fiction I've read all year. One of the reasons I loved this book so much was the fact that it took place in St. Petersburg and I just visited there over the summer and knew pretty much all the palaces and sites they described. It was like reliving my trip!The story follows Rasputin's daughter, Masha, as she copes with the brutal death of her father and the overthrow of the Tsar. She and her sister are exiled along with the Tsar's family and in their confinement she becomes close with the Tsar's son, frail Aloysha. To pass the time as they await their fate, Masha weaves beautiful stories for the bedridden tsaravvitch, about the history of her family, her father's past as a healer and the young love of Nikolay and Alexandra (Aloysha's parents and former rulers of Russia). It's beautiful, sad, and exquisitely written and it will inspire you to check out more about this horribly misunderstood chapter of Russian history. Too often we villify Rasputin as a sorcerer (in Hollywood and in history) but this tale humanizes him and his family and brings to life the distressful last days of the Tsar's family (we all know what happens, but we still power through in this novel hoping that magically history will indeed change itself and save their family).An absolute must read. You won't regret it! I plan on checking out more from this author. She is one hell of a storyteller!
Posted by Erin Cataldi at 9:14 PM 1 comment: 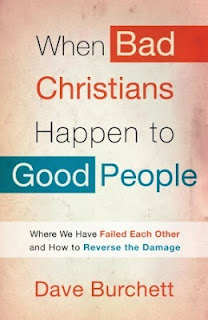 What an aptly titled book. I myself am a Christian (specifically Catholic... if you really wanted to know) but time and time again I find myself in awe of how hateful and judgmental other "Christians" can be towards other Christians and good people (and heaven help us normal people!). This book does an excellent job of defining fear based theology and describing where some Christians have fallen off the path. Jesus said to love one another not condemn or pass judgement on them. Dave Burchett, a sports broadcaster and prolific blogger, outlines many different steps that Christians can take to see the err in their ways and how by working together and loving all we can reclaim all those who are disillusioned with the church. We need to let go of live as "Jesus followers, not rule enforcers."

This is an interesting read and can easily be read in small chunks. It's a little "preachy" but in the best sense possible. Might make a snarky, yet useful gift to your overbearing Christian friend who thinks you're going to hell for having a gay sibling (or something).

Posted by Erin Cataldi at 7:29 PM No comments:

I've been a little late getting on the comic train and so far my only forays into "the dark side" have been Watchmen, The Fables series, and The Walking Dead comics. So basically I'm a newbie. I was pretty pumped when I found out that my old college pal, Jon Parrish (http://www.facebook.com/pages/Secrets-and-Shadows/451460871561118), had started work on his own comic series.

When the first issue came in I was more than impressed. The artwork on Secrets & Shadows is fantastic. My grandmother, a bat-shit crazy, yet hilarious old art teacher who generally dislikes comics and graphic novels, was even captivated (which is saying something!). So this review comes with not one, but two, stamps of approval in regards to the illustrations.

As for the plot, the comic does an excellent job conveying Joseph Shaw's bitter resentment towards his father, Dark Haven's very own superhero Dark Sun. Haven City is a busy metropolis and Joseph uses the expanse of the city to hide from his haunted past. He works as a dishwasher, although he clearly is more qualified than that. He's turned down multiple job promotions because he's happy hiding at the bottom. Joseph wants to live a normal life and put as much distance between superheroes and himself, but it looks as if that might be hard to accomplish because an ominous new villain enters the scene. What happens you ask? Read the comic! It's very engaging and hard to put down. I'm eagerly awaiting the next issue to see how drastically Joseph's life might be changing. You can't hide from superheroes forever, especially when one is your father! If you're interested in purchasing (and you should be by this point) you can order the first comic in the series online at: http://secretsandshadows.storenvy.com/. So far only the first one has been published but the rest will be out in no time. So go ahead and read it, you won't regret it!


Posted by Erin Cataldi at 1:08 PM No comments:

I was quite impressed with this book. Young adult literature has finally moved past vampires and dystopian societies! Woot! It was refreshing to finally read a young adult fantasy novel that was original and insightful. "Shadow and Bone" tells the story of Alina Starkov, a young woman capable of extreme power if only she can harness it. Alina was raised in an orphanage with her best friend, Mal, and since they've been of age they have been in the Kings army. In a world where kingdoms fight each other and cower from the terrifying pit of darkness (the fold) that divides the land there is little hope of leading a normal life. The Grisha (magical elite) try to keep the peace with their powers but the Border Wars have raged on for over one hundred years. During an attack in the fold, Alina saves her best friend from beasts and in the process discovers a power that had been hidden inside her. She is whisked away by the Grisha where she must learn to cultivate her magical abilities and join their ranks. They think she can help end the war but she soon gets a sinking suspicion that they are trying to use her for their own endgame.

It's truly a captivating read and I for one cannot wait for the next in the series to come out. A stunning first novel from, Leigh Bardugo.

Posted by Erin Cataldi at 12:24 PM No comments: 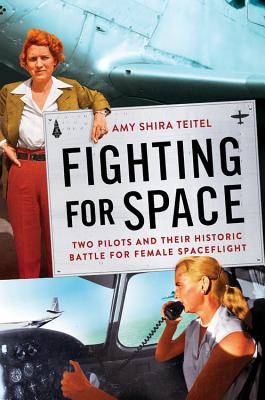