Life of the Party 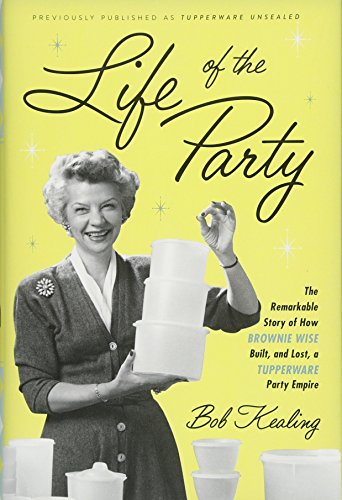 I am mildly obsessed with microhistories, I read a ridiculously awesome book on the "dark side of Beanie Babies" last year so when I saw that this book was about the Tupperware Party empire I knew I would have to read it. Easily readable and filled with pictures, this book hooked my interest immediately. Bob Kealing does an excellent job telling the story of Earl Tupper, his amazing invention and the woman who practically created direct selling and home shows as we know them. Brownie Wise perfected the art of home shows and empowered an entire generation of stay at home women. Her business savvy helped Tupperware grow more than Earl Tupper could have ever imagined. But as Brownie Wise got more and more positive press about being a businesswoman in the 50s so did Early Tupper's resentment of her, Brownie was seen as the figurehead of the company and basically ran things unchecked. Kealing tells the story of the rise and fall of Brownie Wise and it's one of the greatest business stories you've never heard.

I received this book for free from Blogging for Books in return for my honest, unbiased review.
Posted by Erin Cataldi at 7:48 AM