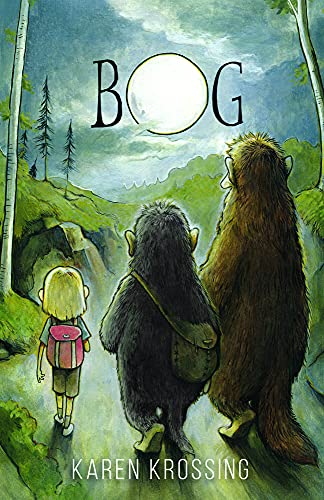 Thematically, not a bad story. But definitely, definitely, not my cup of tea. Before I let my opinion of this book cloud your mind, I do want to state that while, I might not have loved this book, I don't see why some kids wouldn't. It's a kid's book through and through and kids (probably 3rd through 6th) that are into fantasy and fairy tales might get a big kick out of this. Usually, I'm perfectly fine reading children's books, but this chapter book must have been the exception. I was a sheer force of will power that enabled me to finish it. Basically the story goes a little something like this.

Bog, a cave troll, goes to seek revenge for his father's "death" (he was turned into stone). The legendary troll hunter has been training recruits on how to trap trolls and lure them into the sunlight. Bog decides that the only way to protect his remaining family is to hunt the Troll Hunter and stop the cycle. Before he sets off on his quest, his grandmother gives him shocking news, Bog is half human! Bog always wondered why he wasn't as ugly and big as the other trolls, but he never could have imagined that his father was ever in love with a human. With a heavy heart he sets out of the woods, before long he saves the life of a forest troll, Small, and they become fast friends. Small agrees to help Bog on his quest but there is only one catch, they have to take a little human child with them. Bog adamantly refuses but when he discovers that there may be a legendary nose stone that can turned stone trolls back to life he begrudgingly takes her along in case she may be useful.

Yep, that's about it. The folklore surrounding the trolls was interesting as was their descriptions. I just couldn't give a hoot about the plot.
Posted by Erin Cataldi at 7:33 AM