A Funny Thing Happened on the Way to Heaven 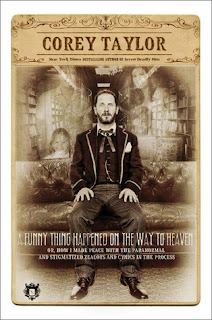 Corey Taylor, that sly beast, has done it again. As if I wasn't awed enough by his first book he had to show himself up and wow me again. Well done.

As I've stated before, it's not fair that a musician (Corey is the lead singer of both Slipknot and Stone Sour) as talented as Corey Taylor has the amazing and uncanny ability to pick up writing and not just do it well, but do it fucking amazing! Save some for the rest of us buddy!

Anyhow, this book is not a sequel to his first foray into writing, "Seven Deadly Sins," but rather a philosophical debate and cache of stories about the paranormal, afterlife, and ghosts. Corey hilariously retells spooky events that have occurred to him and his friends throughout their lives and discusses the ethics and philosophies of the paranormal.His musings really get you thinking! Yes he may ramble a bit (thankfully, his ramblings are hilarious) but as he says:

But what do I know? I am a singer in a band.. I am prone to outbursts of profound berserker ramblings that fade into one-way lanes before over correcting to keep my Mopar mind on the road... I am the Buddha of babble - witness the vitriol and savor its profundity.

This book will make you think, you may not agree with what he says, but that's not the point, as Corey states,

No one here is going to scoff or judge or fuck with you. I will not allow it. That right there is a beautiful thing about new knowledge, really. It may be strange, and it may scare the fucking shit out of you, but you will wonder. YOU WILL WONDER.
Posted by Erin Cataldi at 10:01 AM