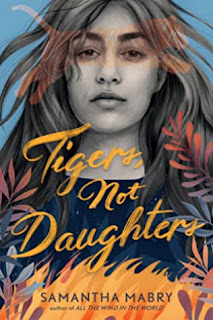 Dark, haunting, and ethereal - this young adult novel chronicling the Torres' sisters and the aftermath of their oldest sister's death is chilling and powerful. A year after Ana falls out her window to her death; her three sisters cope with it in different ways. Jessica the now oldest, deals with it by slowly trying to turn into Ana. She wears her clothes and makeup, tries to pick up smoking, and even dates the same boy that Ana had been sneaking off with in the night. Iridian has turned into a total recluse and barely leaves her room let alone the house. She re-reads all of Ana's old books and is trying to drown her sorrows in her writing. Rosa, the youngest tries to talk to the neighborhood animals, finding peace in nature and in church. Their father, well their father is useless; a shell of a man. A year after Ana's death - her ghost inexplicably starts inhabiting the house and the week following her "return" is one that will turn the girls lives upside down. Magical realism at its best!
Posted by Erin Cataldi at 12:55 PM