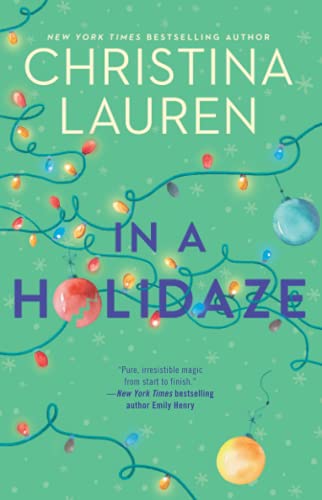 Cute, charming, and a great holiday romance. I didn't love this as much as the last three Christina Lauren books I read but I only think that's because I'm not a fan of groundhog day or other book/movie tropes where you keep reliving the same days over and over again until you "learn your lesson." Honestly that was the only thing I didn't like about this book. Maelyn Jones and her family spend Christmas every year at their friend's cabin in the mountains. Their parent's friends and their kids come as well and it's like a huge extended gathering that Maelyn looks forward to every year. It doesn't hurt that she also gets to see Andrew, the boy she's had a crush on him since she was 13 (even though he's practically her brother). She royally screws everything up though when she makes out with Andrew's younger brother, Theo, while drunk and he witnesses it. She's mortified - if she could only turn back time. On their way to the airport their car is hit by a truck and she wakes up... on the plane headed to the cabin for Christmas. What? It takes a couple attempts at reliving Christmas to figure out what she's supposed to do but soon she realizes she needs to choose which of the brothers will make her happy. Witty and hilarious. I love this writing duo!
Posted by Erin Cataldi at 12:21 PM