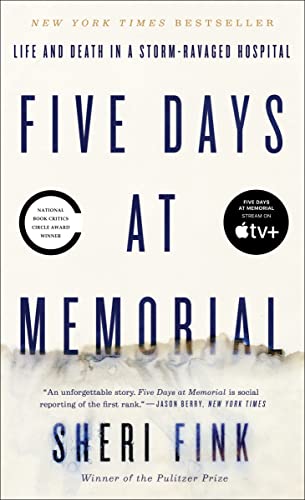 Engrossing and impossible to put down, this non-fiction book will grip readers from page one. Author, Sheri Fink, interviewed hundreds of doctors, nurses, patients, family members, and prosecutors, involved in the horrifying experiences of Memorial Hospital to paint a picture of the awful conditions and the hard decisions that were made. When Hurricane Katrina ravaged New Orleans, Memorial Hospital was under water, lost power, and eventually lost generator power and hundreds were stranded without power, over 100 were patients. Doctors and nurses struggled with no sleep, dwindling supplies, deathly sick patients, and trying to keep people from overheating and dying. Despite their best efforts many died, and controversy arose that some of those patients had been helped to die with additional morphine. Many adamantly disagreed saying that morphine was given to alleviate the dire conditions and pain. After five days when the last living patients were rescued, controversy arose and many of those involved found themselves embroiled in controversy with what really happened in the hospital. The mounting tension and terror is hard to read and you feel as if you're right there with them. The included pictures really help paint the picture and set the scene. It's unfortunate, but reading this will help you think about how well you could cope in an emergency. A must read!

I received this book for free from Blogging for Books in return for my honest, unbiased review.
Posted by Erin Cataldi at 12:39 PM