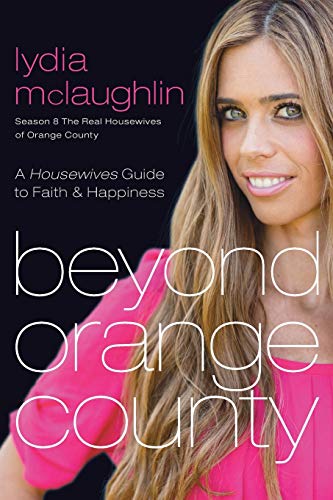 I'll admit, I have never watched an episode of The Real Housewives... ever, reality TV is not my cup of tea. So I was mildly interested in checking out this book that was written by a "Godly" housewife (seems impossible, at least from what I'd heard about the show). Lydia felt that she was called to be on season 8  of The Real Housewives of Orange County to show women that she could be a positive Christian role model. This book is part memoir, part devotional, part guide to female Christian behavior. It's an insanely fast read (short and large print!) and can be gotten through in several hours. It can also be used as a group discussion guide because there are questions at the end of each chapter. The different spiritual topics she touches on include: dealing with discouragement, family matters, forgiveness, finding peace, self-image and worth, and so much more. It's a memoir mixed with scripture, statistics, how to's, prayers, and more. It's primarily aimed at mothers or wives, but other spiritual women could still gain a thing or two from reading this. It' nothing groundbreaking, but it may reach the hands of some non-spiritual people who will only read this because it was written by a housewife, so it has the potential to seek out new audiences. A good introduction guide to spirituality for those unfamiliar with it or those who have lost the purpose in their faith.

I received this book for free from First Look Blog Tours in return for my honest, unbiased opinion.
Posted by Erin Cataldi at 2:00 AM