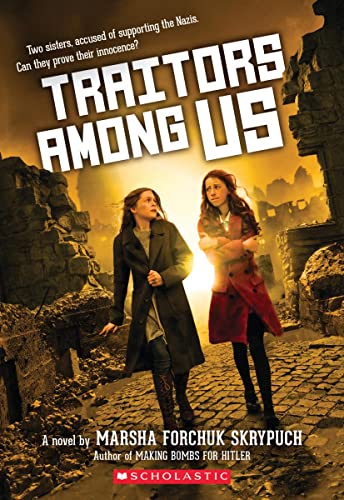 Bestselling middle grade author, Marsha Forchuk Skrypuch (Making Bombs for Hitler), writes a compelling World War II novel for young readers about the dangers that lurk even when the war is over. Sisters, Krystia and Maria, have suffered greatly in their native country of Ukraine. They thought that they finally made it to safety when they made it to a displaced persons camp and that the worst was behind them. But while there, they see a face from their past, a young Nazi girl. Before they can tell the Americans that they have a traitor in their midst, Krystia and Maria are accused of being Nazi collaborators, by that same girl who really was involved with the Nazis. Despite their pleas and denials, they are taken away by Soviets and interrogated for crimes they never committed. Wonderfully narrated by multiple authors who bring the girls different viewpoints, trials, and tribulations to life. The sisters survived the Nazis but will they be able to survive the Soviets? Gripping and eye opening. Young readers will devour this war novel that deals with content not normally discussed in history class or seen in novels. Historical fiction at it's best.
Posted by Erin Cataldi at 10:15 PM

Email ThisBlogThis!Share to TwitterShare to FacebookShare to Pinterest
Labels: traitors among us