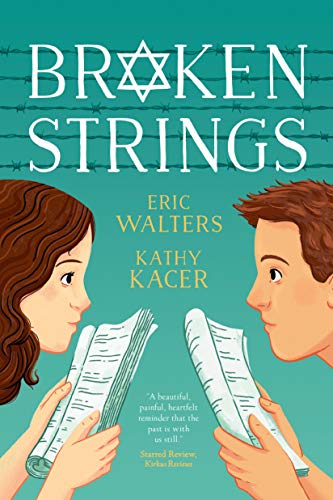 My heart! This was such a tearjerker for me. This middle grade novel set in the months following the fall of the Twin Towers wrecked me emotionally and I can't recommend it enough. 8th grade singer, Shirli Berman, wants to look forward to something positive in the aftermath of the 9/11 attack and the loss of her grandmother. She has her sights set on being Hodel in the spring musical, Fiddler on the Roof. When she is stuck playing Golde, the mother, she is at first disappointed but then realizes her "husband" will be the most popular boy in school. She may not get any solos but she can act and sing her heart out. As a Jewish teen, Shirli relates to the story of the musical, her grandfather was even from Poland not long after the play is set. She wants to really get into the part so she starts going over to her grandfather's house more and trying to get him to talk about his past, something he never does. Even her father (his son) doesn't know about all the terrible things he suffered through during the Holocaust. Shirli and her grandfather start bonding over the musical and start opening up to each other in very powerful ways. A wonderful, moving story.
Posted by Erin Cataldi at 1:22 PM