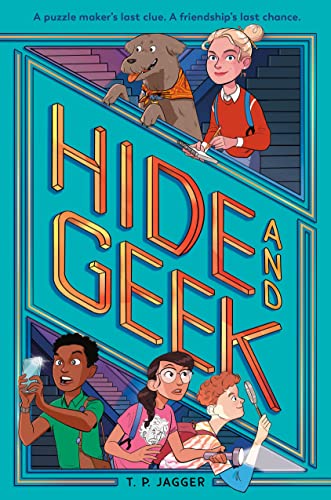 Debut children's novelist, T.P. Jagger, has written a witty and fast paced adventure story full of mystery and intrigue that will delight and engage young readers. Four best friends, Gina, Edgar, Elena, and Kevin have been not so affectionately dubbed the GEEKs, based on their initials. Rather then be offended, they have decided to embrace their new name and run with it. Their hometown of Elmwood used to be a famous little spot as the hometown and headquarters of the famous toymaker Maxine Van Houten. Her popular toy, the Bamboozler, kept more than half the town employed - with residents making the puzzle sphere in the local factory. However, the factory is going to be shut down and the GEEKs may be separated forever if their parents have to move away too find new employment. Luckily, the GEEKs discovered that Maxine left one final puzzle behind. A treasure hunt that will lead to a treasure that will save their struggling factory and town. Only those who truly love Elmwood and it's unique history will be able to solve and find the clues. Will the GEEKs live up to their name and solve the clues to save the town? Humorously narrated by the talented voice actress, Danice Cabanela, who does a great job portraying all four kids. A perfect listen for readers who love puzzles and adventure and the first in series! - Erin Cataldi, Johnson Co. Public Library, Franklin, IN