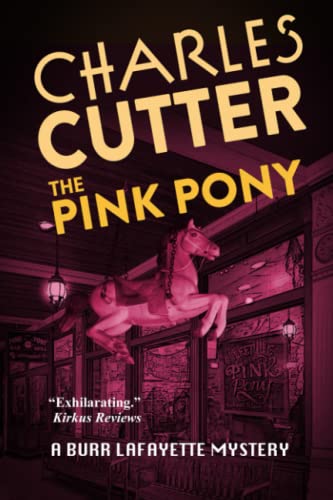 The Pink Pony is a favorite bar of many and the morning after the famed Port Huron-Mackinac sailboat race, poor Jimmy Lyons is found strangled to death there. Mackinac Island has never before had a murder and it's all anyone can talk about. Burr Lafayette is vacationing on the island after participating in the sailboat race, and in no time at all he is pressured to take on the defendant despite never been involved in a murder trial. Burr is an excellent litigator, despite having a problem hanging on to money (especially after his divorce); without any other cash prospects he agrees to try and clear Murdo of murder charges. The first step is trying to find other suspects (of which their is no shortage as Jimmy owed everyone money) but he's having a damned hard time getting any evidence. His loyal dog Zeke, his two dependable co-workers, and a lot gin martinis are needed if he's going to turn from litigator to lawyer - but what if Murdo did do it? Filled with island life, boating, booze, regional food, and a cast of quirky characters - this is a book readers won't soon forget. Lots of twists and turns will leave readers puzzling over the case themselves. An excellent start to a new mystery series!
Posted by Erin Cataldi at 2:51 PM