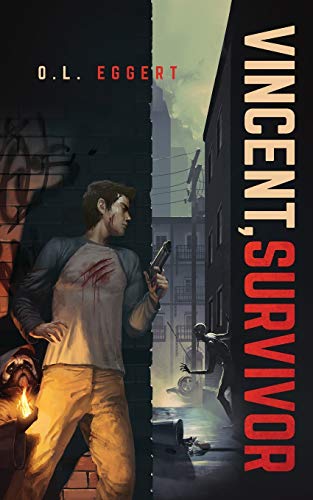 Full of fun, this wacky dystopian novel pulled me in from the first page. Vincent and his older brother Dante practically grew up on the streets. With all the violence, disappearances, and his brother getting locked up in jail, Vincent assumed that his city Oakwood would kill him eventually. But that's where he's wrong. Evil forces have come into the world through magic portals and he has to dodge minotaurs and ghouls. He wishes he had to worry about gang violence, because this is too weird even for him! All he has is his smart ass mouth, a pistol packing elder by the name of grandma, a talking pug that is supposedly the greatest wizard ever, his brother, and the cute girl next door. Together they must try to escape the city to get to a sanctuary they heard about on the radio or risk getting torn to bits. Full of adventure, ridiculousness, sarcastic comebacks, and general badassery; this book will appeal to readers of comedic fantasy, Christopher Moore and Douglas Adams. Lots of fun and a great debut by O.L. Eggert. The books ends on a bit of a cliffhanger, so get ready for the next book; this is the first in a series!

I received this book for free from the author in return for my honest, unbiased review.
Posted by Erin Cataldi at 8:36 AM