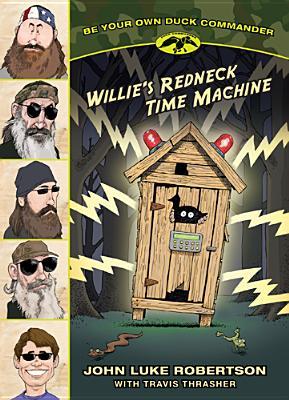 It's no secret, I'm not a huge fan of the Duck Dynasty franchise (it's everywhere!) but I thought that I had better see what all the fuss is about. I'm a public librarian and some of the most frequently requested items are the Duck Dynasty books, memoirs, cookbooks, DVDs, etc. If all my patrons are into it, than maybe it's time I see what the hype is about. I might as well start small so I decided to go with a kid's book. "Willie's Redneck Time Machine" is one of four "Be Your Own Duck Commander" titles, there are also: "Phil & the Ghost of Camp Ch-Yo-Ca," "Sin in Space," and "Jase & the Deadliest Hunt" in the series.  I was pleasantly surprised when I realized that this was a choose your own adventure book!

The reader plays the part of Willie Jess Robertson (This book caters mainly to boys, obviously. The only women mentioned are not strong adventurous women like the MEN of the family, but hey, whatever floats their boats!) who discovers an odd looking outhouse in the shop. Readers will laugh out loud as they get to decide what to do at the end of each chapter. Should they go in the outhouse? How far back in time should they travel? Should they listen to their belly and go to dinner instead? Unlike the original "Choose Your Own Adventure" books, there is no dying in this series so need to worry about scaring kids. If something "bad" happens (think dinosaurs), Willie just wakes back up in the shop. No harm done.

This book series is perfect for little boys (poop jokes, dinosaurs, hunting, etc.) and fans of the Duck Dynasty franchise. It's clean (except for poop jokes) and perfectly sensible for little kids. No death, no guns (except to kill adorable little ducks), no scandalous behavior.

Also, you're in luck! I have a copy to raffle off to anyone who comments on this post! If you want to win a free copy, just let me know why in the comment section below!!

I received this book for free from Tyndale Press in return for my honest, unbiased opinion.
Posted by Erin Cataldi at 3:12 PM