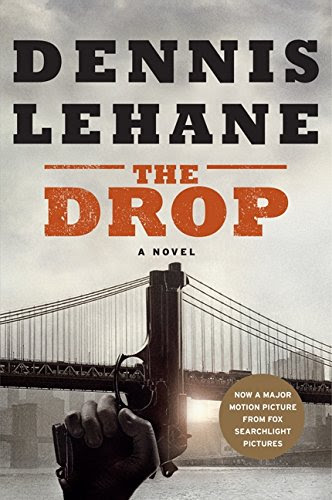 I made the mistake of watching the movie trailer first so I can only picture Tom Hardy as Bob and James Gandolfini as Cousin Marv. Honestly though, I don't think that's a bad thing. I mean, have you seen Tom Hardy? Yowza! That was one of our main reasons for picking this for book club, because we knew we'd have a great movie to look forward to as well!

This book is quite short for Dennis Lehane novel, in fact, this was originally a short story entitled "The Animal Rescue" that Lehane expanded, and then wrote a screenplay for (his first), at the request of a producer. The resulting story was released at the same time as the movie.

If the movie is half as good as the book, I am going to love it. "The Drop" is phenomenal, it's easily one of my favorite crime/thriller reads of the year. It's gritty, engrossing and totally packs a punch at the end. For being so short, there is some amazing character building. Bob, the bartender and animal rescuer is awesome. Why don't I have a Bob in my life? Tom Hardy seems like an ideal fit to play him. I don't want to summarize the book too much and give it away. Just trust me on this, read it!
Posted by Erin Cataldi at 2:25 PM