The Berenstain Bears: Blessed are the Peacemakers 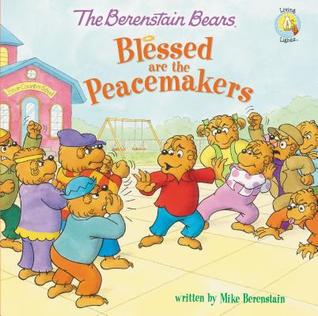 Being naive as I am, I had no idea that "The Berenstain Bears" franchise was still going after Stan and Jan's death. Their son Mike Berenstain has taken over the beloved characters and created a faith based "Living Lights" series featuring the Berenstain Bears. Instead of featuring a moral or lesson, each book features a different psalm or Bible quotation.

Blessed are the Peacemakers highlights, "Blessed are the Peacemakers, for they will be called children  of God." - Matthew 5:9. In this story, Brother Bear and Sister Bear must try and keep the peace as two school rivals face each other in the school. Most of the time the cubs get along, but Too Tall is a famous instigator and he doesn't like that Queenie and Ferdy are playing starcrossed lovers in Romeo and Grizzliet. Mean words are exchanged and fists are raised can Brother Bear and Sister Bear save the play and their friends? Or should they mind their own business?

A great book for Christian children and fans of The Berenstain Bears.

I received this book for free from Book Look Bloggers in return for my honest, unbiased opinion.
Posted by Erin Cataldi at 5:53 PM