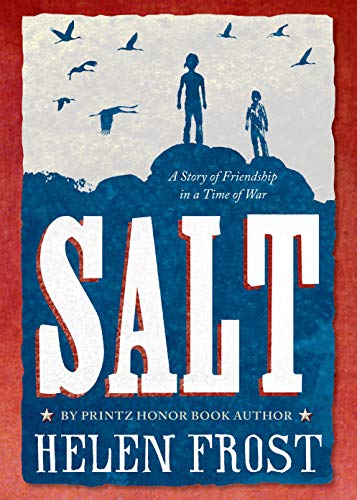 A must read (or listen!) for fans of middle grade historical fiction! Set in 1812 at the onset of the war, twelve year old white settler, James, and twelve year old Miami Indian, Anikwa, discover what it is that separates them and what it is that binds them. Can they remain friends as war looms closer to Fort Wayne, Indiana?Their days were spent trapping, fishing, playing, and exploring, but now they must grow up and be men. They need to decide whose side they're on: the British, the Americans, The Indians, or their own.

Told through the alternating perspectives of both James and Anikwa, this story brings to  life their friendship and the cultures that surrounded them. As the tagline suggested, this truly is "A story of friendship in the time of war." Boys especially, will like the hunting and wilderness aspects, but there is enough historical intrigue and friendship to interest female readers as well.

The audiobook edition to which I listened to, also added an entire new dimension to the story. The narrators were brilliant and really helped narrarted the concerns and emotions of the two twelve year old friends.

I received this book for free from Librarything Early Reviewers in return for my honest and unbiased opinion.
Posted by Erin Cataldi at 7:52 AM