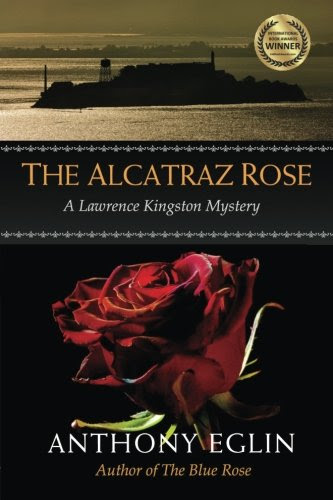 It's a shame that there isn't more of an online following for the Lawrence Kingston mystery series, or maybe there is but not in America. I would have loved to have stumbled upon this series sooner! I love good ol' murder mysteries, especially English ones, and this one is very reminiscent of Ellis' Peters' Brother Cadfael series. Not in the same time period obviously, and our main character isn't a monk, but they both seem to be wrapped up in mysteries that involve flowers or fauna. Which may sound lame but is actually kinda cool.

Lawrence Kingston is a respected botanist and acclaimed amateur sleuth. When a thirteen year old girl approaches him asking if he'll look into her mother's disappearance several years prior he can't refuse. What starts off as a simple cold case of a missing person rapidly evolves into a murder mystery, followed by the discovery of a once thought extinct rose on Alcatraz Island. Kingston discovers that many loose threads might actually be connected and he find himself trekking all over England and across the sea in America.

I may not be very good at predicting mystery endings, but this one left me doubly stumped. I would never have figured it out on my own had I not read all the way through. I look forward to reading the rest in this series. For fans of English murder mysteries.

I received this book for free from the author in return for my honest, unbiased opinion.
Posted by Erin Cataldi at 1:21 PM