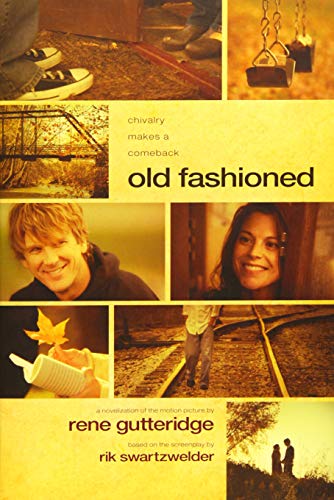 Sometimes you just need a light, fluffy read that has a predictably cheesy happily ever after ending. I was getting the January blues and this definitely fit the bill for "gentle read." Normally I don't like books based on movies (although I love them the other way around), but since I hadn't seen the movie, "Old Fashioned" I was totally ok with the book. I have no idea how it is compared to the movie though since the movie is releasing on Valentine's Day this year (it's competing against 50 Shades! Good luck old boy!).

Chivalry makes a comeback. Free spirited Amber, is constantly jumping from one adventure to another. When her car runs out of gas in quaint little college town she decides to give it a chance. She finds the perfect little apartment for rent that comes with an adorable landlord. The only problem is, her landlord is the most old fashioned person she's ever met. He won't even be in the same room as an unmarried woman and doesn't believe in dating. That doesn't stop Amber though, she keeps "breaking" things in her apartment so her landlord has to stop by. Even though she's regulated to standing on the stoop and talking to him through the screen door, it doesn't deter her. Clay, her reclusive landlord, is hiding from a past. He's radically changed his life in the past nine years but he still feels the burden of his guilt. When carefree Amber waltzes in his life, he feels a pull he hasn't felt in years. But he's soo scared of repeating the past that he knows he has to do things much much differently this time.

Pretty adorable story, with obvious Christian undertones. Looks at alternatives for dating and discusses redemption for sins in the past. Definitely one of my favorite inspirational reads (trust me, that is hard saying. inspirational romance is NOT my go to genre!).

I received this book free from Tyndale press in return for my honest, unbiased opinion.
Posted by Erin Cataldi at 7:28 AM