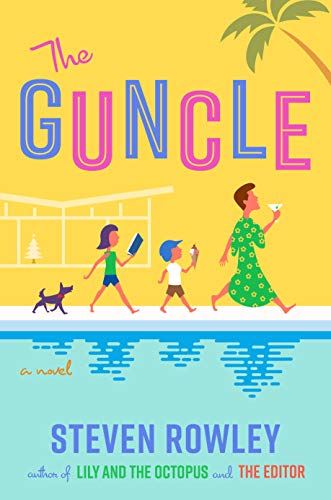 Lived up to the hype and then some! Extremely heartfelt, hilarious, and touching. I was enamored with this unconventional family trying to work through their grief and get to know each other. When Patrick's best friend and sister in law dies after a battle with cancer, his brother asks that he takes the kids back with him to Palm Springs so that he can check himself into rehab. And not just for a little bit either, ninety days - the whole summer! Patrick is a former tv star, a golden globe winner, and a sassy gay man who is perfectly content to be a recluse. Kids?! At his house?! They'll ruin the baby grand piano, trash the pool, ruin his collection of pristine Playbills. And for the whole summer?!? But he'll do it for Sarah. He knows a lot about grief and heartbreak and someone has to be there for his niece and nephew so it may as well be him. Five year old, Grant, and eight year old, Maisie, are a handful but as they get used to their GUP (Gay Uncle Patrick) they start to get into a routine and Patrick discovers that his life has never been more full. The kids are helping him as much as he's presumably helping them. They may not drink martinis but they know how to have a good time. The kids are hilarious and Patrick is someone you'll immediately want to be friends with. I could not put this book down. Soo soo heartwarming.
Posted by Erin Cataldi at 2:20 PM

Email ThisBlogThis!Share to TwitterShare to FacebookShare to Pinterest
Labels: steven rowley, the guncle