Science Fiction - Orphans of the Sky 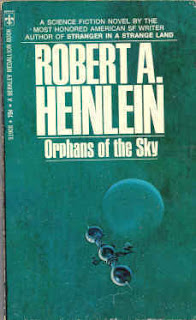 Author: Robert A. Heinlein
Title: Orphans of the Sky

Plot Summary: I was due for a sci-fi classic and this slim little novel sure did the trick.
Set far into the future, Hugh Hoyland starts exploring "the ship" a 5 mile long (2,000 feet across) steel expanse that is the only known world to its inhabitants. The people on board the ship have no concept of anything outside the ship, the idea that anything could exist beyond its steel walls is inconcevable. The lower decks are inhabited by the citizens and the largely unexplored upper decks are inhabited by the "muties," deformed creatures that attack anyone who ventures up.

One day while exploring, Hugh ventures too far up and is captured by a dwarf (Bobo) and a 2 headed man (Joe-Jim). His captors are intrigued by him and decide to "educate him" and take him on as his slave. Hugh doesn't mind and soon discovers a forgotten room on the upper decks. With the help of Joe-Jim, Hugh begins to understand that the universe is bigger than the ship and for the first time he sees the stars. The question is, what is he going to do about it, can he make the ship move again?

I thought that this book was quite original and the concept was very intriguing. Hugh's world is literally turned around when he realizes that everything he was taught and believed is false. It's a fast read and has an interesting conclusion. Disclaimer, it's quite sexist (the women are subjected as slave wives, and cannot speak up. they are often beaten and not one of the main characters is female) but if you read past it (hey, it was the forties) you'll be sure to enjoy it.

Similar Works: (via GoodReads)
The Green Odyssey by Philip Jose Farmer
Time and Again by Clifford D. Simak
Deathworld 1 by Harry Harrison
Posted by Erin Cataldi at 9:06 AM