Adventure - The Spy Who Loved Me 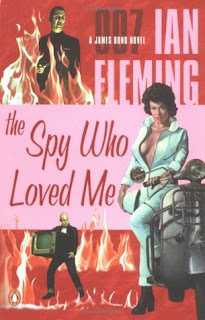 Title: The Spy Who Loved Me

Plot Summary: It's hard to go wrong with a classic like this and Ian Fleming didn't disappoint. It's a fast paced action adventure and the low page count makes it impossibly fast to read.

It is one of the shortest and most sexually explicit of Fleming's novels, as well as a clear departure from previous Bond novels in that the story starts off the the perspective of the "Bond girl." In fact, most of the book is from her perspective and takes place before she ever meets 007!

A young Canadian woman by the of Vivienne Michel finds herself traveling across America on a scooter. She breaks for a bit at a motel and is offered a job watching the place by herself until the end of the season. On her first night alone, two thugs come in to rough her up and do who knows what else. Bond himself does not appear until two thirds of the way through the book, when he waltzes in the motel after suffering a flat.

Obviously he saves the day and seduces the girl, but in order to learn all the awesome details you'll have to read this classic for yourself.

2. Non-Fiction: (via subject heading search in WorldCat)
Her Majesty's Secret Service: the making of the British intelligence community by Christopher M. Andrew
MI6: Inside the Covert World of Her Majesty's Secret Intelligence Service by Stephen Dorril
British Security Coordination: The Secret History of British Intelligence in the Americas, 1940-1945 by William Samuel Stpehenson
Posted by Erin Cataldi at 1:53 PM