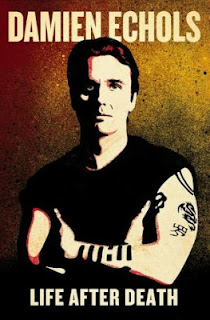 Holy shit. I haven't had a book depress me, disgust me, inspire me, and compel me this much in a long time. It's a book filled with injustice and I applaud Damien Echols for making it through this insane and maddening ordeal.

I had followed the West Memphis Three case extensively when I was in high school. For those of you who aren't familiar with the case, in 1993 three teenage boys in Arkansas were wrongly convicted of satanically murdering three little boys. It was a very modern day Salem witch trial and Jason and Jessie were given life imprisonment and Damien was given the death sentence simply for being the town "outcasts." I watched the 3 HBO "Paradise Lost" documentaries and read "The Devil's Knot," but nothing touched me more than Echols memoir of the incident and his experiences in prison.

After Damien was found guilty he spent EIGHTEEN years on death row and his life was utter hell. In this book he describes the fellow prisoners, daily rituals, and how hard it is to keep sane when you're in solitary confinement. It is a true triumph of the human spirit.

This memoir is written quite eloquently and goes back and forth between memories of his childhood, coping with the WM3 case, his life in prison, and his life as a free man (he was released mid 2011). The prose sticks with you and you find yourself going on an emotional rollercoaster ride with Damien as he recounts some of the worst points of his life.

This is seriously a must read. Despite all the odds, Damien came through a horrific ordeal that kept him imprisoned for half of his life. Injustice like this cannot be forgotten. Read his story and be inspired (also be sure to check out the Sundance documentary "West of Memphis" produced by Peter Jackson, it's coming out on DVD soon). Corruption exists everywhere, what are you doing to stop it?
Posted by Erin Cataldi at 8:53 AM