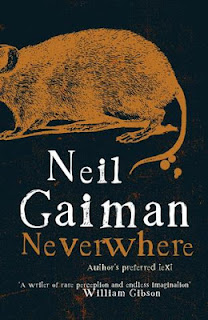 This was definitely not my favorite Neil Gaiman book. There was a lot of plodding around and not enough character development.

This "fanciful adventure" (not a mystery Molly, not at all!) takes place in London Below. London Below is lurking beneath the streets of London, it's a magical place full of dark lurking tunnels, rat-speakers, moving markets, and interesting underground creatures. Perfectly normal Richard Mayhew (from London Above) finds a young girl hurt in the street, ignoring his fiance's wishes he takes the girl home and helps her. Little does he realize his life is about to turn upside down. Within 24 hours he loses his job, his fiance, his apartment, and ultimately his life. He ceases to exist in London Above and must try to survive in London Below. He goes on a mission with the young girl he rescued, Door (you read that right, that's really her name), the Marqui des Caraba, and a woman named Hunter. Together they try to piece together why Door's family was killed and how to get Richard back home.

Overall, the writing style is nice, Gaiman is always ludicrously descriptive and it's fun to get caught up in his imagination but the overall plot did nothing to steal my attention. It's a merely ho-hum story, not Gaiman's strongest effort.
Posted by Erin Cataldi at 8:33 AM