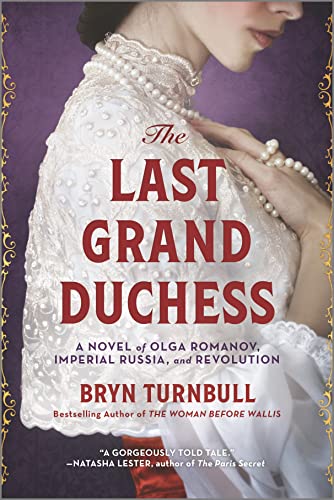 Rasputin and Anastasia have long captured the world's imagination and are often the first two figures thought of in the doomed Romanov family. Bestselling author, Bryn Turnbull flips the script however, and instead focuses on the eldest Romanov child, Grand Duchess Olga Romanov, in this moving historical drama. Olga comes of age as a young woman during a very tumultuous time in Russia, her family's way of life is on the way out and she is struggling to come to terms with her family's place in it. The Russian people love her and her family, they are just and fair rulers, aren't they? As war looms, Olga and her sisters trade the glittering palace life for nursing and do what they can to help the wounded soldiers, but will it be enough for the Russian people. Equal parts gleaming and romantic, readers cheer on Olga's romantic exploits, while hoping that she will somehow escape her fate. The Last Grand Duchess slowly gets darker and gloomier, as the tragic end that readers know to expect, creeps closer. Expertly narrated by Mary Jane Wells, whose cadence and accent lends itself well to the esteemed Romanov court. A new take on an overtold and tragic story. - Erin Cataldi, Johnson Co. Public Library, Franklin, IN