At the Edge of the Orchard 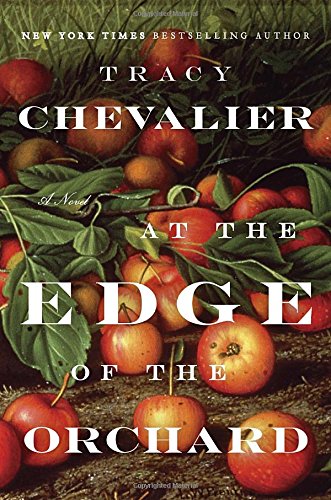 Chevalier, Tracy. At the Edge of the Orchard. 7 CDs. unabridged. 9 hrs. Books on Tape. ISBN 9781101924983.
Chevalier (Girl with a Pearl Earring) pulls no punches with this hard hit tale of a pioneer family that can't ever seem to get ahead. In 1838 the Goodenough family settles into the Black Swamp of northern Ohio and try to have a go at planting apple trees aided by the traveling salesman known as Johnny Appleseed. James cares for his apple trees better than he does his ten children (half of which have died), savoring the sweet apples they can make. His wife Sadie however, only likes the trees when the apples produced are bitter, making them ideal for alcohol and giving her an escape from the life she detests. Told from alternating viewpoints and letters, this tale of rough rugged living sucks listeners in with four distinct voice talents, all of whom embody and enliven the tale with their rough accents. Every drawl and whistle, and song bring the Black Swamp to life for listeners. Meticulously researched, heartbreakingly beautiful, deceptively simple, and superbly narrated. Another must read from the queen of historical fiction. - Erin Cataldi, Johnson Co. Public Library, Franklin, IN
Posted by Erin Cataldi at 1:40 PM

Email ThisBlogThis!Share to TwitterShare to FacebookShare to Pinterest
Labels: apples, at the edge of the orchar, frontier, historical fiction, tracy chevalier