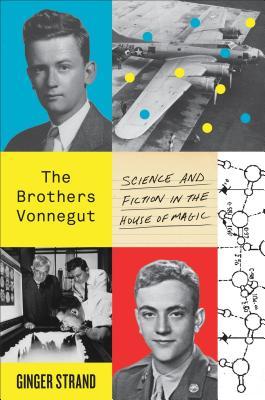 Strand (Killer on the Road: Violence and the American Interstate) beautifully illustrates the juxtaposition of the Vonnegut brothers, Bernard and Kurt in this compelling narrative of their lives and contributions in their respective fields. During WWII while Kurt was hunkered down beneath a slaughterhouse surviving the firebombing of Dresden (later a basis for his bestselling novel, Slaughterhouse Five), his brother Bernard, a scientist, was flying in the air testing out cloud seeding and producing rain.  The brothers led vastly different lives, but shared the similar experience of both working for GE (General Electric), which back then was lovingly referred to as the "house of magic." While there, Bernard studied the sky and experimented with weather control and Kurt reveled in all the fantastic things he saw and heard, many of which become the basis for his later novels and short stories. What happens when science is no longer used for good, but for evil; are scientists compelled to be moral or just make progress for progress's sake, regardless of the consequences? Strand breaks down Bernard's science and Kurt's stories and it produces a fascinating look at two different, yet very similar, brothers. Compellingly narrated by Sean Runnette, this eye opening read is perfect for both fans of science and Kurt Vonnegut. A must read.  - Erin Cataldi, Johnson Co. Public Library, Franklin, IN
Posted by Erin Cataldi at 2:17 PM