A Thousand Shall Fall 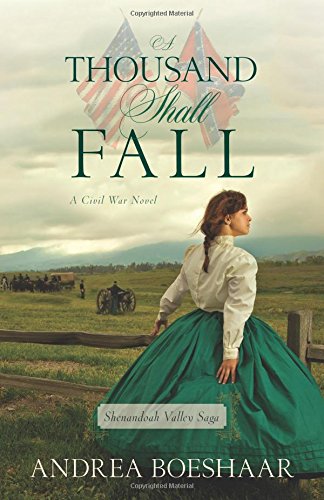 Sassy, independent, Carrie Ann Bell, finds herself in a pickle when she's captured by Union soldiers and arrested for impersonating an officer. It had all started off soo innocently enough, her younger sister had run off and Carrie thought it was her duty to sneak behind enemy lines to go find her. The Yanks have no idea what to do with this smart talking, headstrong woman, but one soldier, Colonel Collier, has his eye on her.

Carrie finds herself caught up in the midst of the war and she doesn't know where to turn or who to trust other than God. All she wants to do is find her sister, but she finds herself compelled to stay and help with the wounded. It doesn't hurt that she also has eyes for the dashing Colonel. Is there time for love in the midst of war? Which side is she loyal to? For fans of inspirational romance and historical fiction.

I received this book for free from Litfuse Publicity in return for my honest, unbiased review.
Posted by Erin Cataldi at 1:00 AM