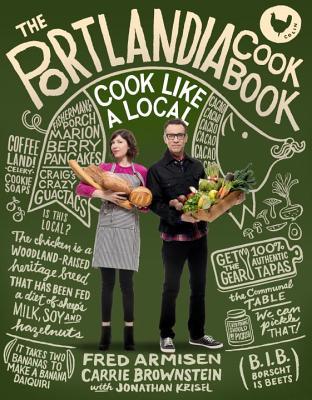 Disclaimer: I've only watched about three episodes of the show, but I was still easily able to recognize characters and their quirky mannerisms in the book. If I had never seen the show I would definitely been a lot more lost. While there are recipes (this is a cookbook after all), there are also many anecdotal sidebars, tips, and stories that refer back to the show and characters. I was hoping that there would be more vegan or vegetarian options, but alas, I believe there was only two or three vegan recipes, not including drinks (but plenty of vegetarian options). I actually was impressed with how good some of the recipes sound. I thought this would be mainly a humorous book, with cooking thrown in as a joke, but there are some pretty damn legit recipes in here. I have bookmarked: kale and quinoa bowl with tofu and mushrooms, tomatoes and snap peas with roasted corn chile dressing, and the tortilla espanola. The pictures looked heavenly and the recipes didn't look overly complicated so I think they are definitely worth a try.


After reading this book, I definitely want to start watching the show again, this book was laugh out loud funny! Unfortunately, only fans of the show or people who live in Portland will really get all the jokes, but as long as you're one of those two you will definitely love this humorous cookbook!

I received this book for free from Blogging for Books in return for my honest, unbiased opinion.
Posted by Erin Cataldi at 7:48 AM