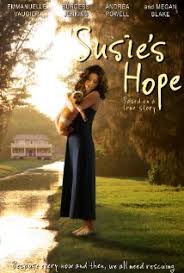 I don't normally go for super sappy movies, but I do have a soft spot for animals and when I learned that this movie was about Susie's Law, legislation that cracked down on animal abusers in North Carolina, I was intrigued.

Donna Lawrence was a pit bull attack survivor. An abandoned pit bull mauled her leg and left her in physical therapy for months. Nearly a year later, Donna learned that a pit bull mix puppy had been found abused and literally broken. Burns were on 60% of her body, her ears were cut off, her jaw broken, teeth missing, and maggots everywhere. She was on the brink of death but a local animal shelter was able to save her. Although, she had been attacked by a pit bull mix, Donna felt a kinship for this puppy. Donna was wrongfully attacked by a dog and Susie was wrongfully attacked by a human, they were a perfect match!  Donna and her husband eventually fostered the pup, and deciding that Susie was a part of the family, eventually adopted her. Susie's abuser was found and brought to court, but unfortunately due to North Carolina's laws the worst that would happen to him would be 8 months probation, he would never serve a term in jail. Donna and her friends decided that the law had to be changed so animal abusers could no longer walk away free. This is their story.

The movie was inspiring and got me to research Susie's Hope, a nonprofit organization that I had never even heard of. The movie is good, albeit a little sappy and HEAVILY Hollwoodized (watch the movie and then read about it online, there are several key differences), but it does a great job of getting the message out.  The story of how some motivated people were able to change the law should get you inspired. Anyone can make a difference if they only try!!

So overall, sappy (but in a good way), semi-low budget (you'll recognize a few faces), and very dramatized, but perfect for animal lovers and lifetime channel enthusiasts. The only thing I have a beef with is the hipocracy that people crusading for animal rights sometime inhabit. Animal cruelty and eating meat go hand in hand. Donna was clearly no vegetarian (numerous bacon frying scenes) and she talks about justice for ALL animals, but really she just means justice for pets. Farm animals and wildlife aren't as cuddly and cute as dogs are so who cares what their living conditions are... end rant.

Finally, who wants to win a free copy of this DVD?!? All you have to do is comment below and I will randomly select a winner next Friday!

"Disclosure (in accordance with the FTC’s 16 CFR, Part 255: “Guides Concerning the Use of Endorsements and Testimonials in Advertising”): Many thanks to Propeller Consulting, LLC for providing this prize for the giveaway. Choice of winners and opinions are 100% my own and NOT influenced by monetary compensation. I did receive a sample of the product in exchange for this review and post.

Only one entrant per mailing address, per giveaway. If you have won the same prize on another blog, you are not eligible to win it again. Winner is subject to eligibility verification.”
Posted by Erin Cataldi at 8:27 AM