The Girl Who Came Home: A Novel of the Titanic 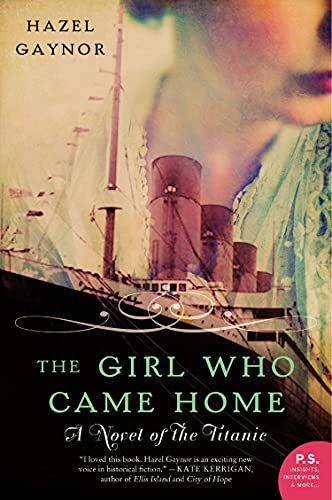 I had pretty high hopes for this book. The Titanic is one of the most morbidly fascinating disasters in the twentieth century so of course I was jacked to read another book about it. It was.... not exactly what I was gunning for. It wasn't a bad book, but it wasn't my cup of tea either. The story has several story-lines, some of which I thought were unnecessary. The focus however, is on a young Irish lass named Maggie Murphey. Her story is told through memories, journals, and first person narrative. Other narrators include; Harry - a young steward, Frances - an anxiously awaiting older sister in New York, Seamus - a heartsick Irish lad who pines for Maggie after she's left, and Grace - Maggie's great granddaughter who learns of her great grandmother's history in the 1980's.

The story is a mish mash of past and present, as Maggie unfolds her tale for her granddaughter. Maggie recounts how quickly the opulence of The Titanic made way for the horrors of trying to escape. There's romance and history but that's about it. I thought the ending was predictable (and no, I'm not referring to the fact that I knew the Titanic was going to sink) and the multiple narrators a bit much. After reading this all I wanted to do was watch Leonardo Dicaprio in the Titanic. And who knows, maybe I will.
Posted by Erin Cataldi at 9:42 AM