Romulus Buckle & the Engines of War 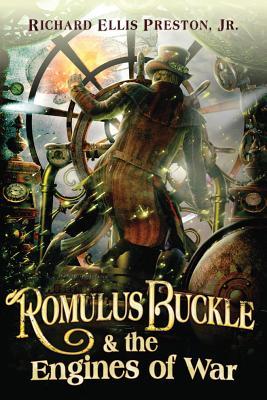 This is officially the first steampunk novel I have ever read and it wasn't too bad! I really didn't think I would enjoy it, but after awhile it grew on me. The main character Romulus Buckle, swashbuckeling captain of the "Pneumatic Zeppelin" is your typical James Bond, cocky, womanizing, brave, type. You just have to like him (although his attraction to two of his step sisters is a little odd for me).

This is the second in a series and it picks up immediately where the last one left off and ends in such a cliffhanger that you're stuck waiting for the next installment. I'm not sure how many are in the series but this book sets it up for a major war against the founders. The whole point of this book is uniting all the warring clans together to fight a common enemy, the Founders.

It's super fast paced. I'm fairly positive that Buckle did not sleep once during the entire book. The characters are pretty well developed and leave you with enough curiosity that you'll want to see how they develop later on in the series.

This book is all steam punk with some fantasy elements thrown in (flying krakens, sabertooths, martians, etc.) so if you're into that kind of thing you will most definitely love this book.

I received this book free from Goodreads in return for my honest, unbiased opinion.
Posted by Erin Cataldi at 3:32 PM