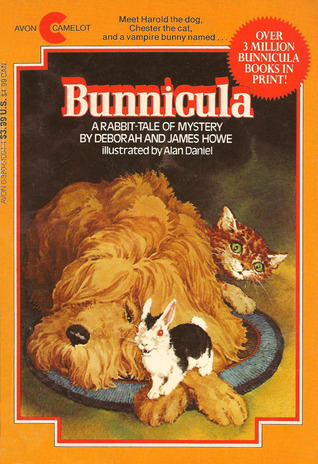 I probably haven't read this book since second grade, but my initial reaction to this book is still spot on. It's fabulous. Even as an adult I still laughed out loud. The scene where the cat, Chester, is trying to get rid of the vampire rabbit, Bunnicula, by "staking" him with a thawing steak is hilarious. I can just imagine that orange tabby covering the bunny with the steak and then hitting it repeatedly. Too funny. They don't make kid's classics like this anymore.

For those of you unfortunate few who have never read this timeless tale... you're missing out. The story follows Harold and Chester, the pets of the Monroe family as they encounter a third pet to their household, a bunny named Bunnicula. The cat Chester is convinced that Bunnicula is a vampire because he sleeps all day, can't stand garlic, has fangs, and turns vegetable white by draining them. Harold the dog doesn't really care one way or another, but Chester is convinced they have to act... before it's too late.

It's a funny and classic story. I will have to re-read the rest of these in the series.
Posted by Erin Cataldi at 9:41 AM