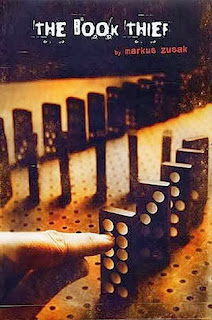 Geoffrey Rush said it was a five handkerchief film and I think the same is most definitely true for the book. It starts off innocently enough, with a word of note from death, the impartial narrator. Death tells the tale of Liesel, a young German orphan who finds a new home in Nazi Germany and forges a strong bond with her new papa. Papa slowly coaxes her out of her shell with his accordion, cigarette rolling, and reading lessons. They start off with "The Grave Digger's Handbook," a book Liesel stole at her brother's funeral, but soon progress to other novels (the majority of which Liesel has stolen). Each novel she conquers marks a new phase in her life. As the war progresses into Germany, reading is her true salvation. It also helps her bond with the Jew hidden in their basement.

This is one of those books that will stay with you. It's haunting and poetic; Death is a fantastic narrator and his insights to the future and value of human life will astound you. It's also nice to read a book from the perspective of the "protagonist," an eleven year old German girl and member of the Hitler Youth, rather than the "victims" (not that there is ANYTHING wrong with reading about the victims, it's just nice to switch it up, I've read dozens of memoirs from survivors and other literature from the side of the oppressed).

I can see why there is so much hype surrounding this book, it's outstanding and might I mention, very critically acclaimed. According to Goodreads, "First released in 2005, The Book Thief has spent a total of 375 weeks on the New York Times bestseller list, and still remains there eight years after it first came out. It has been translated into over 40 languages and has been adapted into a movie."

Damn, I am obviously going to have to see the movie version of this in theaters.
Posted by Erin Cataldi at 3:23 PM