How to Ruin Your Life By 30: Just Follow These 9 Easy Steps! 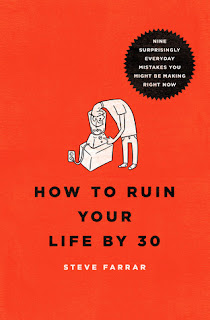 I think this short, little book contains some great ideas, but it still falls short of the mark. Steve Farrar offers a lot of valuable advice such as how to find your true purpose in life, how to follow the laws of cause and effect, trust God, etc. But I think his message will only truly be appreciated by the most conservative Christians. The advice is well meaning but not always attainable or well advised.

A few of the things I had problems with are as follows:

1. The author makes it clear that divorce is never ever an option. Which I agree, in most cases divorce isn't an option. People need to take their vows seriously and work through their problems. But he fails to mention abuse or other severe cases when divorce is necessary. Putting forth ultimatums is never good. In rare cases divorce is justifiable and encouraged.

2. He considers homosexuality a "sexual immorality." Now I know most Christians frown upon gays, but I thought the teaching was, that being a homosexual was not a sin, only ACTING on homosexuality was a sin (not that I agree with that, I'm just repeating). The author makes no clarification and just calls out the gays. Not cool.

3. Farrar is borderline sexist/ very traditional in regards to gender roles. He states multiple times that women need to be comfortable in their femininity, allow their husbands to provide and lead, become mothers, AND not to dress cheap. There is nothing shaming boys from ogling pretty girls but there is a whole section on what women should wear. Again, not cool.

4. Finally, dating non-Christians is not worth your time?!? Really?! I thought for sure he would at least say, "convert your significant other" or something, but instead he says, "Don't give any consideration to the possibility that you might lead them toward the Lord. God doesn't need you to do His work in their life." Harsh man, harsh.

Overall, an interesting read, but maybe I'm just to liberal in my love for the Lord and humanity.

I received this book for free from Moody Publishing in return for my honest, unbiased opinion.
Posted by Erin Cataldi at 1:15 PM

Email ThisBlogThis!Share to TwitterShare to FacebookShare to Pinterest
Labels: Christian, How to Ruin Your Life By 30: Just Follow These 9 Easy Steps!, self help, steve farrar