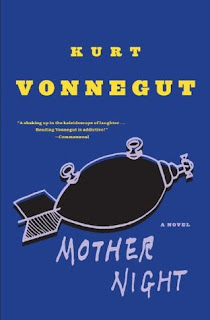 In preparation for a workshop on teaching Kurt Vonnegut next week, I'm rereading some of Kurt's more popular works. I haven't read "Mother Night" in about five years so it was fun revisiting it. Per usual Vonnegut inserts lots of dark comedy and zany writing into his novels. This novel follows an American, Nazi war criminal, Howard J. Campbell as he recounts his life, the war, and his time in Israel cell awaiting trial for crimes against humanity. It's not such a cut and dry case however, is Howard really guilty? He was a very convincing and cut-throat Nazi propagandist but he was also an American undercover spy, does one negate the other? What defines a man? Vonnegut dives deep into the human psyche to show how mulch-faceted we all are. Not everything is black or white.

Vonnegut's prose is beautiful and witty and as always warms my soul a little. Like all of his other works this is a must read!
Posted by Erin Cataldi at 1:29 PM