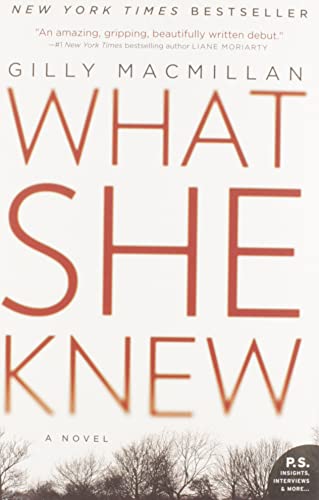 A twisty police procedural/thriller about an abducted young boy. Alternating between one of the police higher ups, Jim Clemo, and the boys mother, Rachel - What She Knew is about lies, betrayal, fear, and second guesses. When Rachel lets her little boy run ahead on the trail she thinks she is giving him some independence. She'll regret that moment her the rest of her life. From then on her boy is missing. The case quickly becomes a media sensation and everyone is quick to lay the blame on the mother. But did she do it? A fast paced thriller that does a good job covering all aspects of the story with the alternating points of view. The ending was shocking to a degree, but not mind blowing.
Posted by Erin Cataldi at 11:44 AM

Email ThisBlogThis!Share to TwitterShare to FacebookShare to Pinterest
Labels: gilly macmillan, what she knew