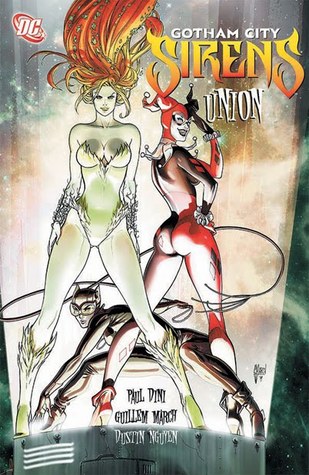 Lavishly illustrated, this comic collection is a definite treat. "With its dark knight fallen, Gotham's dark angels ascend..." Cat woman decides to pair up with Poison Ivy and Harley Quinn because after having her heart ripped out, she realizes that there is safety in numbers. Without Batman, Gotham has retreated back into darkness and even these feminine criminals need to watch their backs.

Cat woman is happy for the company, but even so sometimes she wants to strangle her new friends and roommates. Ivy is determined to figure out Batman's identity, even if it means drugging cat woman, and Harley Quinn won't stop going on about the Joker. Loads of good fun, this kept me more than entertained.
Posted by Erin Cataldi at 9:35 AM