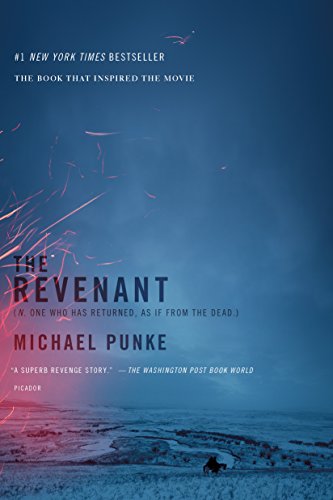 There's something to be said about reading a good wilderness survival book. That something is I wouldn't last two minutes. However, just because I wouldn't survive, doesn't mean I don't thoroughly enjoy reading all about someone else who would. Even from an early age reading Gary Paulsen, I was always captivated by those much stronger than me. To survive in the wilderness you need to be not only physically strong, but mentally strong, something that the main character in The Revenant certainly is.

Loosely based off of historical events; Hugh Glass, a fur trapper travelling up the Missouri river in 1823, finds himself in a perilous situation. Having been brutally mauled by a bear, the captain of the Rocky Mountain Fur Company leaves two fur trappers behind to look over Hugh while he slowly dies and then give him a proper burial. Unwilling to wait for Hugh to succumb to death, the two trappers not only leave him on his own, but take his weapon and tools, ensuring that he will never survive. The betrayal spurs Hugh Glass into action, slowly he heals with only one thought on his mind, revenge. He will hunt down those who abandoned him and deal out his brand of wilderness revenge. Dodging wild animals, Native Americans, and the perilous winter, revenge is what he heals Hugh and keeps him going. An astoundingly fast paced read. Filled with death, despair, and survival, this will make you glad to live in modern times.
Posted by Erin Cataldi at 12:34 PM