Pilgrim's Wilderness: A True Story of Faith and Madness on the Alaska Frontier 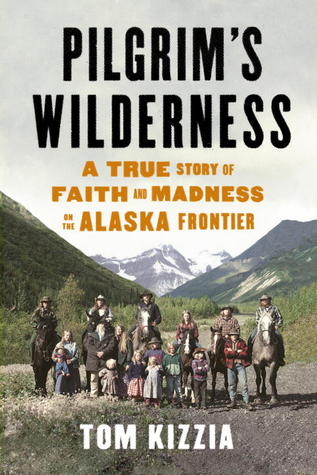 Nothing like a good ol' nonfiction book to make you say, "God's Underpants!!! What have I just read?!?!?!?!" I had never heard or read about this case before so this book was a real eye opener. Papa Pilgrim and his fifteen children moved to the wilderness of McCarthy, Alaska to get a fresh start. Papa Pilgrim and his clan operated on old school Christian ideals; their family had minimal contact with people, were "homeschooled" (most couldn't even read), and lived off the land. At first the small town of McCarthy (population less than 100 and insanely hard to get to as there were no roads and it was in the middle of a National Park) welcomed these nice, albeit weird, newcomers. But as months progress they began to sense that something was very wrong. Were they hiding out in Alaska, escaping from the past, what was wrong with the children, what were they doing up in the hills and why did they hate they hate the park rangers? This drama unfolds slowly over time and the trouble that author, Tom Kizzia, goes through to collect, newspaper clippings, testimonials, police reports, and more is staggering. As the case against the Pilgrim family grows, Papa Pilgrim seems to get more and more reckless. Was the family followers of Papa Pilgrims crazy Christian zeal or were they hostages too scared to get help in the wilderness. Gripping and masterfully told, this story of faith and madness on the Alaskan frontier will be sure to grip every reader.

I received this book for free from Blogging for Books in return for my honest, unbiased opinion.
Posted by Erin Cataldi at 11:00 AM