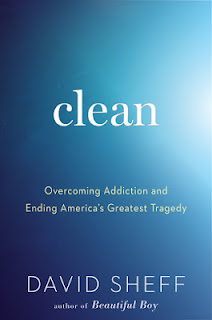 This was definitely one of the hardest books I've read this year, not because it was badly written but because the subject matter was very personal and not at all comforting like I hoped it would be. I'm not going to go into details in this book review but those of you who know me, know why I find this subject hard. It's something that I never would have guessed would affect me or anyone I care about, but who am I kidding, this is the 21st century. Addiction is more prevalent then ever.

Prior to this book, I knew the concept behind addiction and thought I had it all figured out. Basically after reading this, I realized I know nothing on this subject. In my head, addicts were selfish people who didn't know when enough was enough and tore their family and friends lives to pieces in their selfish downward spiral. Clearly, I have a very old fashioned way of thinking, I had never once considered addiction a "real" disease.

Author, David Sheff, does a marvelous job of outlining addiction (why we use, the disease, drugs and alcohol in our culture, etc.), and ways to get addicts clean (he describes dozens of different treatments, not everyone can get clean the same way) and stay clean. David has a lot of experience dealing with addiction, his son Nic spent years addicted to hard drugs and later wrote the book, "Tweak." David Sheff outlines the struggles of dealing with addiction as a family in his first book, "Beautiful Boy" ("Clean" is his second novel).

Some interesting facts and tidbits that I took away from this book:

1. Comparing money spent on cancer and AIDS research as compared with addiction research = "the total spent on AIDS is $3 billion - or $3,000 per infected person. We spend $29 per addict." (page 290)

2. "In Vancouver, at a supervised injection site called, Insite, drug users are given not only clean needles but a safe place to shoot up and stay while they're high... A series of studies has shown that Insite is effective at getting addicts into treatment, lowering crime in the neighborhood, and reducing the number of overdoses and illnesses from drug use." (page 302)

3. In Portugal the government decriminalized the possession and use of all drugs - not only marijuana but heroin, cocaine, and the rest. Drugs are still illegal, but users caught with small quantities aren't sent to jail. Instead they face a panel consisting of a psychologist, social worker, and legal adviser who recommend appropriate treatment... A study found that five years after personal possession was decriminalized, illegal drug use among teens had declined, rates of new HIV infections had dropped and the number of people seeking treatment for drug addiction had more than doubled. Prior to the change in policy, Portugal had one of the highest rates of drug use in Europe, afterward, it had one of the lowest." (pages 303-304)

4. "A majority of patients who enter treatment never complete it. Among those who do, 40 to 86 percent relapse in the first year." (page 17)

5. "The stigma associated with drug use - the belief that bad kids use, good kids don't, and those with full blown addiction are weak, degenerate, and pathetic - has contributed to the escalation of use and has hampered treatment more than any single other factor."(page 25)

6. Addiction IS a disease. " A disease is "an interruption, cessation, or disorder of a body, system, or organ structure or function," according to "Stedman's Medical Dictionary. It's "a morbid entity ordinarily characterized by two or more of the following criteria: recognized etiologic agents, identifiable group of signs and symptoms, or consistent anatomic alterations." Addiction fits every one of these criteria." (page 89) Addicts aren't weak, selfish, or amoral - they're ill.

7. "Researchers have found that if a person makes it to two years [being sober], his likelihood of relapse diminishes dramatically, and after five years, most addicts will continue to stay sober." (page 266)

Sorry I got a little wordy on the statistics, but those are only just a handful of what you can discover in this book, I  learned soo much. I learned how complex addiction is and how hard it is to treat. This is an absolute MUST read, a real eye opener, and very present in our society as we reflect on the United States failed drug war.