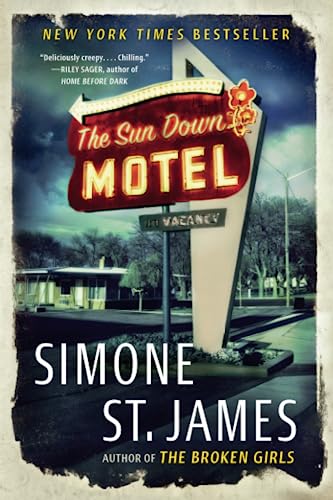 Impossible to put down. This thriller grips readers from the beginning and holds on to them til the very end. Told in two alternate timelines. In 1982, when Viv runs away from her home she tells her mom she's running away to New York City to become an actress. In all actuality, Viv doesn't care where she ends up as long as it's far away from home. She makes it to a sleepy town in upstate New York and lucks into a job working as a night clerk at the motel she's staying at. Things aren't what they seem at the Sun Down, is it haunted or is her mind playing tricks on her? Decades later in 2017 Viv's niece, Carly, comes looking for her. All she knows about her Aunt Viv is that she went missing in 1982 and was last seen at the Sun Down Motel. It always bugged Carly that no one in her family talked about her missing aunt. Now that Carly's mom has died, rather than processing her grief she's going to go back to the beginning, back to the Sun Down Motel. Genuinely creepy and wonderful. A must for fans of true crimes and armchair detectives.
Posted by Erin Cataldi at 8:04 AM