A Curious Man: The Strange & Brilliant Life of Robert "Believe it or Not" Ripley 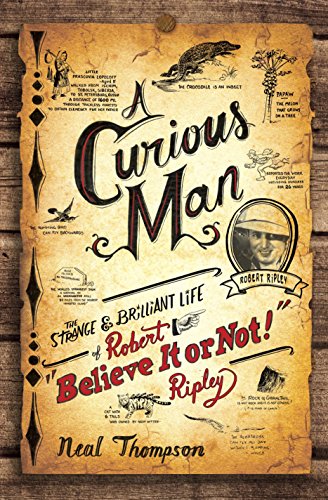 Strange and brilliant doesn't even begin to cover it. Robert Ripley was the true "believe it or not." Since I was a child I had always been enamored with the believe it or not franchise. I had some of the books and even visited one of the odditoriums when I was a kid. Not until I picked up this book though, did I know a thing about the founder of this bizarre empire. Neal Thompson lovingly puts together Ripley's life starting from a young boy up until his premature death at 59. Ripley started off a shy, gawky, artist and quickly turned into one of the most influential and wealthy men of his era. His rise to fame began small and then skyrocketed. He exposed the oddest people, facts, and feats and people loved him for it. His cartoons, radio and tv shows, books, and side shows became the most unusual and beloved in America. Unfortunately, it started to go to his head and although he was generous and fun, he could have a temper. He kept a fast paced schedule and worked non-stop and it eventually took a toll on his health. Author Neal Thompson does a great job chronicling the rise and fall of Ripley as well as outlining the lasting impact of his empire.

For fans of the odd and biographies.

I received this book for free from Blogging for Books in return for my honest, unbiased opinion.
Posted by Erin Cataldi at 10:01 AM

Email ThisBlogThis!Share to TwitterShare to FacebookShare to Pinterest
Labels: believe it or not, biography, neal thompson, robert ripley