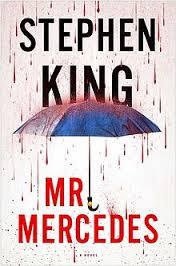 I was due for a fast paced thrill ride and Stephen King's latest thriller certainly did the trick. King takes a departure from his darker horror novels to create a wonderful crime thriller which is certainly less creepy than some of his other materials, but still dark.

The story follows retired police detective Bill Hodges, a man on the verge of withering away in his La-z boy chair. Life holds no excitement for him, that is until, he receives a letter in the mail from the Mercedes Killer, one of the few men that eluded capture while Hodges was still active duty. The Mercedes Killer was responsible for running down dozens of people standing in line at a job fair in a stolen Mercedes, killing eight and critically wounding many others. He got away without a trace but he's not done with the fun. Now he wants to make the fat ex-cop his next project. Little does he know that this might just be the wake up call that Hodges needs to get on with his life.

Suspenseful, thrilling, and disturbing, this is a must for fans of crime novels and Stephen King. Readers will also enjoy the black teen that Hodges uses as a sidekick. Witty and insanely smart, that kid could have his own series! Hands down my favorite character. I want a Jerome in my life!
Posted by Erin Cataldi at 12:29 PM