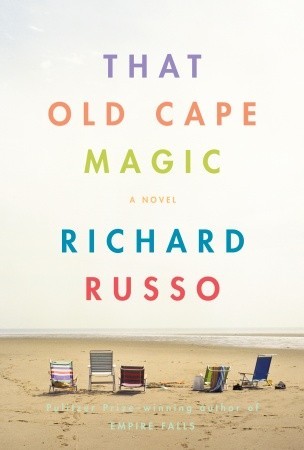 I picked up this book after one of the ladies in my book club said (and I quote), "It was the best book I ever read." Wow, I thought, with a glowing recommendation like that, it's got to be good! Not exactly.

Too be fair, Richard Russo has written a lot of other books (none of which I've read) and won a Pulitzer prize, so I know he's a good author. And this book was well written. But.... I still didn't like it. At all. I couldn't relate with the characters, I didn't care about their struggles, I felt nothing.In fact, I kept forgetting that the main character was in his fifties (maybe sixties...), he felt too young to me. But I digress. It was written well, developed well, told well, it just didn't click with me. I really did want to like it. And there were moments when I laughed out loud (the wedding rehearsal dinner at the end is quite hilarious).

To dumb down the plot, it's basically about a husband going through a late midlife crisis who can't decide what he wants out of life. Does he prove his miserable parents right or wrong? Does he leave Joy and go back out to LA to screen-write or stay with her in Maine and keep his teaching position? Whose opinion is more important: his, his wife's, or his parents?

For fans of literature or Richard Russo.
Posted by Erin Cataldi at 9:15 AM