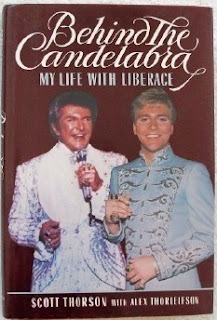 This will be filed as one of the most bizarre and impulsive reads I've embarked on this year. I was inspired to read this memoir after reading an article in last week's "Entertainment Weekly" about the upcoming HBO movie on Liberace's life and lover starring Matt Damon and Michael Douglass. I was so intrigued that I went out and got the book, even though I know little to nothing about the legacy of "Mr. Showmanship." This book told me everything I ever wanted (and didn't want) to know about the private and hidden life of one of the world's most notorious and high paid performers.

Scott was eighteen when he was wooed and seduced by Mr. Showmanship, a man forty years his senior. They had a love/ hate relationship and within five years this poor foster kid was living a more opulent lifestyle then he could ever imagine. Fur coats, priceless jewels, multiple cars, hanging with celebrities. It's every kid's dream. That dream however, turned into a nightmare when Scott underwent plastic surgery to have his face resemble Liberaces (clearly Liberace was a vain man, who makes their lover undergo surgery to look more like themselves?!?!) and as a result became addicted to drugs. The nightmare came to a close when Liberace cheated on him and then kicked him to the curb.

This tell all tale is morbidly fascinating and I can't wait to see the HBO version. Read it, you won't be disappointed!
Posted by Erin Cataldi at 9:21 AM